3D printing news News Top 12 3D-Printed Robots — From Amphibians to Humanoids
Robotics brings together all the technologies that make it possible to design autonomous machines; combining knowledge in electronics, mechanics, and even biology. This is a field that has evolved quite a bit since C-3PO first hit the movie screens in Star Wars in1973. Roboticists have been in constant search of innovations that result in greater speed and productivity. Today, we have smarter robots because of advancements in artificial intelligence, machine learning,  and of course, additive manufacturing. Indeed, 3D printing is widely used to manufacture robots, whether in the prototyping or final production stage, to imagine structure, materials, and new functionality. This is why we wanted to present to you some of the fascinating 3D printed robots we’ve come across, everything from humanoids, research tools, or even DIY machines—a section that should be of interest to all makers!
Research organization Intel Labs used 3D printing to develop the Openbot, one of the robots that caught our team’s attention the most. The objective of the project was to create a small electric vehicle intended for smartphones, with the motto ‘Transforming smartphones into robots‘. The device is equipped with vast networks of sensors and has powerful computing capabilities allowing it to take advantage of the advanced functionalities of smartphones. Intel experts say they have opted for 3D printing because of its great accessibility, and also thanks to free software that facilitates the development of this type of project. 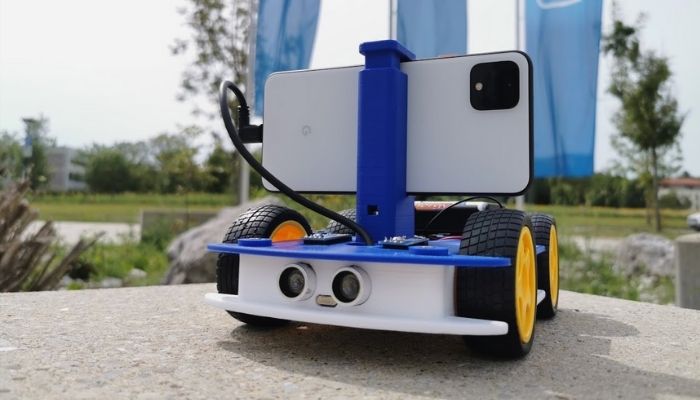 LittleBots is another project that you can do at home with your 3D printer. This robotics kit was created to serve as an introduction to robotics. It features all the necessary components of robotics: sensors, decision-making, and articulation, all in one simple, easy-to-assemble kit. What’s interesting is that LittleBot is fully 3D printed, so it can be made with just 3 screws. The device is open-source and controlled by an Arduino Nano, to take advantage of the global community around it. You can find the 3D print files of these robots through Thingiverse; The Arduino code can be found on the LittleBots download page.

Boston Dynamics’ Atlas humanoid robots have recently caused quite a stir online with their performance during an obstacle course. Although they have already had some success, Boston Dynamics aims to test the limits of what is possible and continue developing Atlas to make robots withstand extreme conditions. The company relied on 3D printed components for the development of Atlas robots. For example, the legs are 3D printed, which made it possible to integrate hydraulic lines into the structure. Additive manufacturing has also been used to produce custom servo valves.

We could have classified the InMoov robot in the DIY category, as it is an open-source project. Indeed, it is the first human-sized open-source 3D printed robot in the world, created in 2012 by the French Gaël Langevin. Anyone with a 3D printer can therefore design their humanoid robot at home, all you need is a printing area of ​​120 x 120 x 120 mm. The different parts of the body are printed separately—arms, head, neck, back, shoulder, etc. Everything is meticulously detailed on the dedicated site, whether it is the printing, assembly, and commissioning of this 3D printed robot. 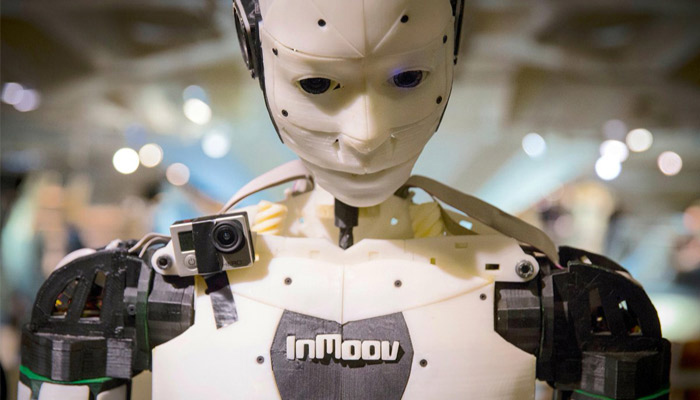 The humanoid robot ‘Poppy’ was developed by INRIA Flowers Laboratory in Bordeaux, France. Poppy is open-source and is used by a community of educators, scientists, and artists by sharing hardware, software, and web tools used for a wide variety of visual programming, simulation, and experiments. The robot relies on 3D-printed components made using polyamide material, giving the robot thermal and high-abrasion resistance. Standing at 83 cm tall (32.6 inches) and weighing 3.5 kg (7.7 lbs), Poppy includes a series of electronic components including a 4.2-inch screen and HD camera and costs about €9,039 ($10,610), with less expensive versions available including the Poppy Torso and Ergo Jr.

Jimmy is a 3D printed robot that was developed by the 21st Century Robot company with the goal of getting as many people as possible to build and customize their own robot through 3D printing. Jimmy is made up of custom 3D printed shells that cover his humanoid endoskeleton. Completely open-source, it is powered by an Intel Edison microcomputer, and controlled via WiFi on a smartphone, tablet, or PC using a dedicated application. 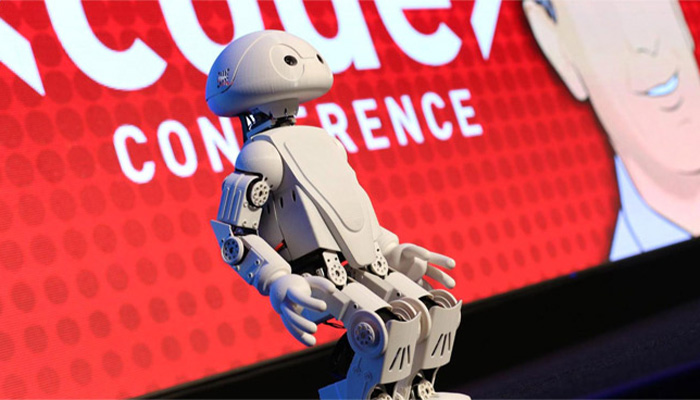 Another offering from the French company Pollen Robotics (also the creators of Pollen), Reachy is described by the company as an expressive open-source humanoid platform that is programmable with Python and made using 3D printing. Though really just a torso, head, and arms, the main drawing point of this particular robot is not just how expressive it is but also how good it is at interacting with people and manipulating objects. The robot’s maneuverability is to thank for these features. For example, its head is free-moving and it can use antennas to convey emotions. Its two arms have similar dimensions, proportions, and movement as an adult human arm, capable of lifting up to 500 grams. Best of all, the robot is completely customizable and learns thanks to machine learning and AI capabilities.

Researchers at the JSK laboratory in Tokyo have succeeded in developing a humanoid robot capable of doing push-ups. But playing sports is not Kengoro’s only special feature—its 3D printed metal coating also makes it unique. A well-known problem with humanoid robots is the overheating of motors. In order to better dissipate the heat generated by the 108 engines, the research team opted for an efficient cooling system that can be implemented using SLS 3D printing. The process made it possible to integrate a cooling system into the Kengoro housing and to modify the energy density of the material at various points. This allows water to escape easily and increases Kengoro’s performance. You might even think that the robot sweats during its athletic efforts! 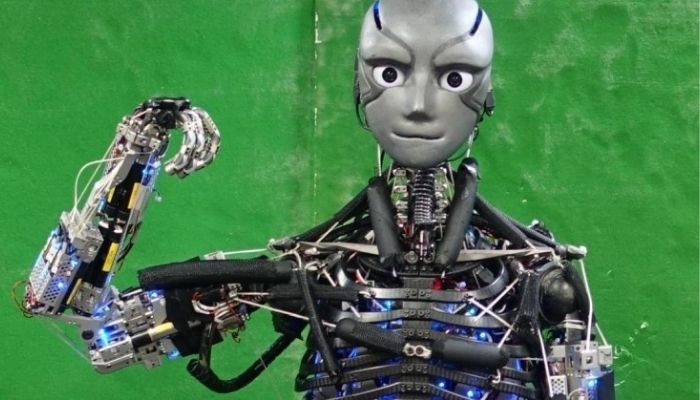 Pleurobot is a 3D-printed robot that mimics a salamander and was designed by the Ecole Polytechnique de Lausanne in Switzerland. This amphibious robot has practical application for neuroscientists, biomechanists, functional morphologists, and paleontologists as well as roboticists. For instance, Pleurobot will enable research that benefits quadriplegic patients as researchers gain better insights into anatomy and motor skills. Research may also focus on the evolution of the passage from a swimming animal to one that walks. Swiss engineers also replicated a nervous system using electronic components with a careful scan of a real salamander. Equipped with motors, Pleurobot can swim, crawl and walk like its amphibian counterparts.

Scientists at Florida Atlantic University’s Cognitive Robotics and Machine Perception Laboratory (MPCR) have developed Astro, one of the few quadrupedal robots in the world. Unlike many robots, Astro is specified to have a computerized brain inside his head. This one, which looks like that of a Doberman, has been 3D printed. But the commonalities with dogs don’t end with the physical. Astro also has artificial intelligence and machine learning that allows it to learn like a canine. Equipped with sensors, radars, and a microphone, the robotic dog responds to classic commands such as “sit”, “stand” and “lie down”. In some time, Astro will be able to help the police as a scout dog or as a service dog for the visually impaired.

While most of the time human-designed robots are large, this is not always the case. At the Georgia Institute of Technology, researchers have developed microscopic 3D printed robots. Dubbed ‘micro-bristle-bots’, they are barely visible to the naked eye and can be controlled by tiny vibrations. Like ants, microscopic robots work in teams and are able to transport materials. To manufacture the ‘micro-bristle-bots’, the Georgia Tech team used Nanoscribe’s Photonic Professional GT 3D printer, based on the two-photon polymerization (TPP) process. According to the manufacturer, this technology achieves a high level of precision and detail and is ideally suited for micro-printing.

At the University of California San Diego’s Jacobs School of Engineering, engineers have been working on soft robotics, or the construction of robots from compliant materials, often taking significant inspiration from the movements of living organisms. One such recent project was when researchers designed and tested 3D-printed insect-like robotics. Using FDM and filaments like ABS or PLA, the insects were made using a flexoskeleton process that added rigid features to key components, allowing them to keep their flexibility. This is not the only 3D-printed soft robotics project coming from the school with more expected in the future.

What do you think of our selection of 3D-printed robots? Let us know in a comment below or on our Facebook and Twitter pages. Don’t forget to sign up for our free weekly newsletter, with all the latest news in 3D printing delivered straight to your inbox!
Your email address will not be published. Required fields are marked *